Football Manila 360 aims to look at football around Metro Manila and the Philippines, in order to help build and promote the football culture by covering what is not covered, particularly grassroots football including highlights and perspectives of the local leagues, teams and players.

We will write about past, current and fun new football insights, personalities, games, opinions, stories and basically everything under the Philippine Sun regarding football. Be sure to stay tuned!

The word “open play” is common in the Manila football scene with organisers coming up with a quick tag line to identify a session open to all. We, who are participate in pick up sessions decided to expound more on the culture.

What is Open Play?

Football is a growing sport in the Philippines thanks to the Azkals who went against the odds by reaching the semi-finals in the Southeast Asian AFF Suzuki Cup back in 2010. Football blew up ever since then, inspiring more people to pick up the sport and play regularly.

Back in 2010, only schools and sports clubs had available fields for people to play on. This was exclusive to the students of those schools and to the members of sports clubs such as Nomads, Polo Club and the villages such as San Lorenzo, Corinthians, Urdaneta and Dasmarinas Village. 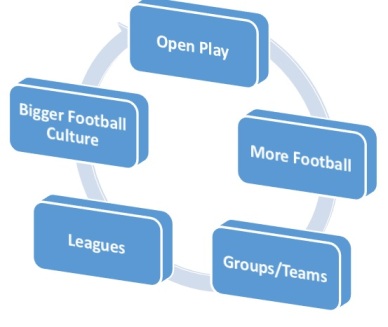 In 2012, the BGC Turf opened. It was the first public, Astro Turf field in the country. As a wire-fence was the only thing separating the field from the street, the Azkals and the UFL clubs could be seen easily by fans or people passing by. Soon after, Chelsea Blue Pitch in Makati, McKinley Hill Stadium, The Camp (now closed), and Sparta all opened up.

With more facilities opening to the public, certain groups took it upon themselves to rent the fields and organize open play for anyone and everyone who just wanted to play football. The games are small-sided – 7 to 9 players per team – and played on half of a full sized field. Each game lasts around 15 minutes.

Open Play has grown in popularity over the years and continues to attract newcomers and beginners. Nowadays, it’s rare to see any Astroturf field empty.

With the different characters from all walks of life all over the world converging on the pitch, we decided to approach some of them and get to know them better and find out what their story is.

Which youth teams have you played for?

“I played in La Salle Green Hills then u19s Global FC where I got to play a few weeks for Global FC’s First Team. I have also played with Kaya FC u17s and Kaya B in the Weekend Futbol League. Now I am with Chesterfields U21 in the U.K. and have been there for a year.”

Chesterfield FC are currently 22nd place in League One – the third tier of the English Football League System managed by former Scotland, Wigan and Celtic Centre Back Gary Caldwell

Left Winger or number 10 but left wing is my favorite

What is until now your proudest memory in football?

Playing for the national team of the Philippines starting from the u13s to the u22s.

Do you come back for competitions with the national team?

Yes, I do when there is an international competition.

What do you think of open play?

Pretty good and fun, you can practice your individual skills while meeting new people.

Why are you back in the Philippines?

I came back to fix my papers. Going back next week.

What brings you to the Philippines?

“I am a law student and came here at intern in the Danish Embassy.”

At what age did you start playing football?

I started very early at age 3 up until 13 back in my home town. Then when I was 17 I started playing again.

What position/s do you usually play on the field?

I play either as Center Back or a Right Full Back

Who do you think is the best footballer ever and why?

What is your best football related memory?

When my team in Denmark got promoted three tiers from the 8th division.

Newbie of the Month – Issang

When did you start playing football?

I started playing football a year ago Jan. 2016 with Football Manila after getting a recommendation from a friend.

How was the first time?

It was exhausting and frustrating, because I really did not know how to play football… I mean, I watch football matches of Bayern but I really had no idea how I could do it. So I kind of felt intimidated because the other players were really good and I wouldn’t make it at all but despite that I find it fun so here I am.

How did you become a supporter of Bayern Munich?

Since college, actually my favourite player is Philip Lahm because he is an intelligent player. In terms of positioning, I really like his style. I kind of find him a cool guy because I do not see him quarrel on the field like the other players. He also shows great leadership on the field, not only for Bayern but also for his country Germany.

So in terms of position, I really want to focus on defending. I think I can be good at it, I did try playing forward but I get very frustrated if I don’t get the ball.

What foot is more dominant?

It is always the right one but I still practice my left even though I can’t seem to put more power on it.

What is your best memory in football as a player?

It was last year, Dec. 2016 when we played in the Beginners’ Cup. It was a triumphant moment because it was the first time we really competed and wanted to win. Because usually during the training with the coaches, I play more relaxed I focus on learning, but during the tournament and playing with a team that had the goal of winning. It gave me a purpose and pushed me further – (in my head, I would think) I will block this and they will not score a goal!

What does football mean to you and why do you continue to play it?

It changes your life in so many ways, there’s no drama. I will tell you now, I am bipolar. And ever since I played football, it has helped balance out everything. I apply it in my daily life, for example: how to be a team player, how to delegate properly, and how to trust my team mates. It has also taught me to be patient and wait for the right moment. Before football, everything was chaotic emotionally. Ever since I started playing, I started making friends, started going out and meeting more people. It really helped me a lot. Football for me is life changing in all aspects, work and meeting new friends.

The Weekend Futbol League, WFL has been ongoing for almost a decade in Metro Manila with teams representing different parts of the Philippines and the world. At the moment there are four (4) division, the Champions, Challengers and Contenders divisions and recently, the Vets Division (aged 40+). It has only a few restrictions in terms of eligibility and mobility but within the standard rules of FIFA with four (4) officials at every game enforcing the rules.

For more details you can have a look on the official website and Football Manila 360 will have more stories regarding the league and its moments.

Manila Wulvers FC was first formed in 2011 as Carrigans by David Neary, a Scotsman, with the aim of introducing the love of football to the locals and providing them equal opportunity to play regardless of skill level.

Wulver is a Scottish immortal spirit taking the form of a man with a wolf head, but unlike ferocious werewolves, it is a kind-hearted helpful creature that helps lost travellers and feeds poor families, which is aptly the spirit the team embodies in nurturing beginners and guiding them to improve individually and collectively as football players.

Previously based in Quezon City with most of its players hailing from the north of Metro Manila, it soon attracted players from all over the Metro with the majority local players and a number of foreign players from different parts of the world including Egypt, Norway, Malaysia, UK, Japan and Belgium.

Wulvers, under the co-management of Marwan Mohsen and Jih Sapantun and the captainship of Joakim Solheim aspires to continue to provide a nurturing environment for aspiring footballers and to be a worthy challenger in local competitions through encouraging discipline, positive communication and focus on teamwork; to simply be the best version of ourselves.

Having been at the losing end of many a matches and losing 3-12 at its worst during at the beginning of the WFL 2016-17 with the rebuilding of the team after losing key players, the team has recently experienced a dramatic transformation by winning 2-1 against a team it had previously lost to 0-4 and held to a draw of 3-3 the team it had lost to 3-12, but the most important progress the club has achieved so far is the embodiment of its “Never give up, never back down” motto.

Stay tuned to our next issue as we will cover more exciting stories such Boracay football, AFC updates and opinions, more interviews on football personalities both professional and non-professional, old and new teams/clubs, UAAP, football updates and events and most especially the much anticipated new national league, PFL?